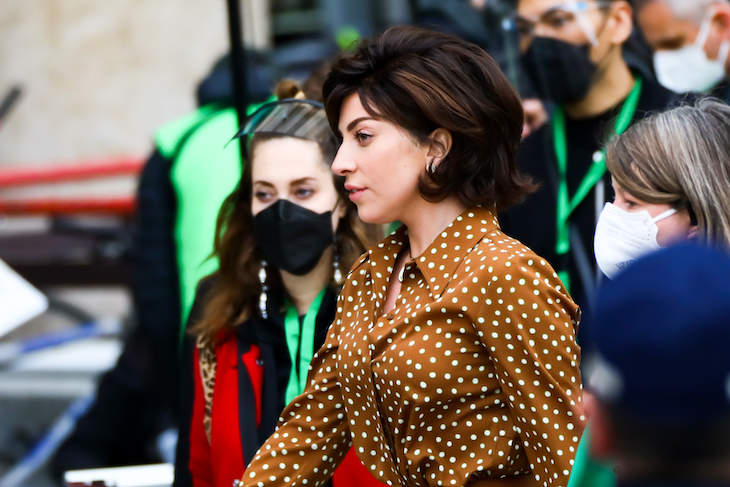 “It is three years since I started working on it,” she launches in on House of Gucci, “and I will be fully honest and transparent: I lived as her [Reggiani] for a year and a half. And I spoke with an accent for nine months of that.” Off camera, too? “Off camera,” she confirms, solemnly. “I never broke. I stayed with her.”

“I started with a specific dialect from Vignola, then I started to work in the higher class way of speaking that would have been more appropriate in places like Milan and Florence,” she explains. “In the movie, you’ll hear that my accent is a little different depending on who I’m speaking to.”

“It was nearly impossible for me to speak in the accent as a blonde,” she continues. “I instantly had to dye my hair, and I started to live in a way whereby anything that I looked at, anything that I touched, I started to take notice of where and when I could see money. I started to take photographs as well. I have no evidence that Patrizia was a photographer, but I thought as an exercise, and finding her interests in life, that I would become a photographer, so I took my point-and-shoot camera everywhere that I went. I noticed that Patrizia loved beautiful things. If something wasn’t beautiful, I deleted it.”

And she went on:

“I had some psychological difficulty at one point towards the end of filming,” she explains, taking care with her words. “I was either in my hotel room, living and speaking as Reggiani, or I was on set, living and speaking as her. I remember I went out into Italy one day with a hat on to take a walk. I hadn’t taken a walk in about two months and I panicked.” She could no longer compute the real world. “I thought I was on a movie set.”

“I knew I was about to play a murderer. I also knew how Tony (bennett, cantante italoamericano ) feels about Italians being represented in film in terms of crime. I wanted to make a real person out of Patrizia, not a caricature. I felt the best way to honor Maurizio and Italians was for my performance to be authentic, from the perspective of a woman. Not an Italian-American woman, but an Italian woman.”